For a few months, myself and the team at Indy Mogul have been trying to coordinate an interview to talk Expanse shot breakdown. I was planning on taking a trip to LA to visit people – but the pandemic put a stop to that.

A couple of weeks ago we were able to do this interview remotely, me from our home in Toronto, Ted in LA. I am very impressed by the Indy Mogul team’s work in putting this together – this is super charged nerding out!

We are thankful to be home and safe and that our loved ones are as well while we all wait this out. Hope everyone is staying positive and productive, as much as they can.

The feature documentary I produced and partly shot, directed by my partner Francis Luta – will be getting a theatrical release at Cineplex Theatres across Canada on April 6th, 2020.

Tickets are only available online via Demand Films’ website… see link below and a list of cities the film will be playing.

We are very excited to see the film we’ve been working on since 2017 find its audience. It will soon have an online streaming home, we will announce further news on that as our distributor Gravitas Ventures works out those details.

A little bit about the film: As the next logical step in his career as a professional explorer, Adam Shoalts sets out to cross the Canadian Arctic in a race against time that will last four months, 4000 kilometers, with no rifle, on foot and by canoe. He is the first to do this expedition in one season, alone. A companion piece to the National best selling book ‘Beyond The Trees: A Journey Alone Across Canada’s Arctic’.

Alone Across The Arctic (trailer) from Francis Luta on Vimeo.

We have begun filming of Season 5 in Toronto, and expect to wrap in late February, 2020. We have been building so many new sets for this season, its going to be a lot of new places for our fans to immerse themselves into. Director Breck Eisner and I are cooking up a great first 2 eps right now! I will be joined by my co-DP Ray Dumas, csc, who will alternate with me for the season. Look forward to seeing the show in HDR and Dolby Atmos on Amazon Prime!

Here’s an official trailer for Season 4:

Last summer I worked on a new Amazon Prime series called “The Boys”. Jeff Cutter shot the pilot, and then I alternated with DP Evans Brown. We had fun coming up with some cool looks… we shot with Red Helium in 8K and primarily used Cooke SF Anamorphics. Check out the new trailer below; which is a mix of all of our work.

The Boys is an upcoming American superheroblack comedyweb television series based on the comic book of the same name by Garth Ennis and Darick Robertson. The show was developed by Eric Kripke, Evan Goldberg, and Seth Rogen. The series is set to premiere on July 26, 2019.[1] In early July 2019, Amazon Video renewed the series for a second season ahead of the series premiere.[2]

Amazon Prime dropped the first trailer for Season 4 at ComiCon San Diego this weekend, as well as the world wide premiere date for the new season – which is December 13, 2019. Check out the new trailer below. I am very excited for our fans to see the show in HDR for the first time… we wanted to go HDR in season 3, but the budget didn’t allow for it as it was not mandated by the broadcaster. But Amazon requires HDR as a delivery spec for all their original content. My colourist Joanne Rourke (at Deluxe Toronto) and I have worked closely together to bring the show into the HDR world – which I think is such a great thing for the immersive experience of Expanse. It really creates a greater sense of depth and drama in our gritty worlds of various grades of space ships, outer space and otherworldly alien environments. To me its the most exciting new tool in image making I have seen since HD.

Its so cool that now I’m going to have to get an HDR tv! For the record, we’ve been using the LG C9 television as a home reference model for HDR viewing… its what Deluxe uses. Compared side by side to the Sony X300 $40,000 4K OLED HDR (1000 NITS) monitor that Joanne and I grade with – the LG is very good, being around 800 or 900 NITS. So in terms of intense contrast and colour – the LG competes really well with the Sony X300.

I am currently deep into principle photography of season two Condor. Its an exciting new genre for me as I have never done a spy thriller before. New looks, fresh approach to lighting and framing… its always good to change things up. With Expanse having become such a major part of my work in the last several years; I have tried to do something completely different between seasons… and this is yet another opportunity for me to do that. I am shooting four of the ten episodes, currently working with director Ali Selim.

I am co-dping with American cinematographer Evans Brown, who I met when doing Amazon’s “The Boys” season one, last year. Its always great to share an episodic project with another collaborative DP so that you can really prep well for each episode.. and develop a rapport with the incoming director, as often times it may be the first time working together.  Evans and I have similar tastes, but different enough that I think we can riff off each other’s approaches to our own eps.

We are shooting in and around Toronto, using Alexa Minis with both Cooke S4 and S5 lenses.

Condor is an American thriller television series based on the novel Six Days of the Condor by James Grady and its 1975 film adaptation Three Days of the Condor written by Lorenzo Semple Jr. and David Rayfiel. The series was created by Todd Katzburg, Jason Smilovic, and Ken Robinson. 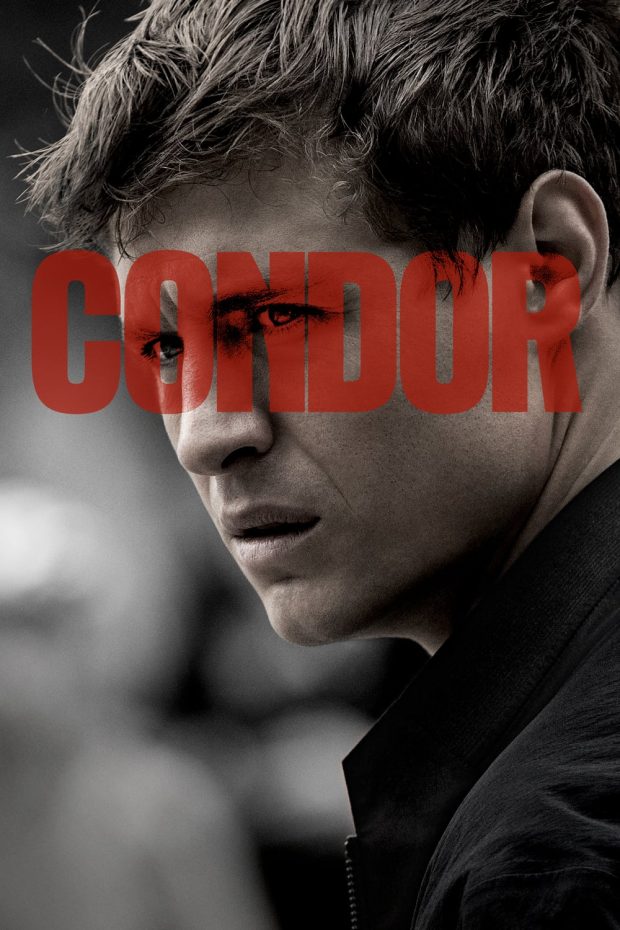 On February 20th, 2019, I remotely recorded a podcast interview for Mike Pecci, who has been doing these podcasts for a while now.

Here’s a link to the podcast site: 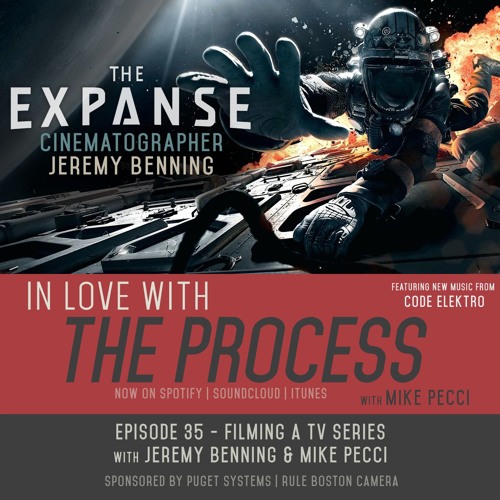 On February 7th, 2019, we completed principle photography of season 4 of The Expanse. This season certainly was our biggest, baddest and most challenging one yet… in terms of scope of the story, ambitiousness and time frame. With Amazon stepping in to save the show last year, our ramp up time to start prep on season 4 was shorter than normal. I think this will be a great season, I start colour grading in March… it sounds like a fall or late 2019 launch on Amazon Prime world wide.

Here’s a fun video we made in conjunction with the Canadian Society of Cinematographers which shows how we handle practical LED lighting in our sets on the show.

Just before I began work on The Boys last summer, my Expanse team were all waiting with baited breath as to the fate of The Expanse with our network, SyFy. As it turned out, SyFy decided not to renew us for a 4th season… but after 10 days of intense fan outcry; which included a crowd funding campaign which saw a plane fly over the Amazon HQ in Seattle with a banner reading “#savetheexpanse” behind it. Then there was also a model of our hero ship, The Rocinante, in orbit of our planet with the same hashtag slogan on it. It was a very emotional and inspiring time… to be so deep inside a world we had built for 3 years and seeing the outpouring of love and support by some of the most dedicated fans I’ve ever seen on something I’ve been part of. Eventually the stunts and tweets to Jeff Bezos worked… as he personally announced that the show would be taken on by Amazon.

One of the big things I am excited about this season is that we get to finish the show in HDR… something we wanted to do last season but there was not the budget for it. This is part of Amazon’s mandate, so now we get to do it!

What a ride, is all I can say. Our sets were being scrapped when this announcement came out. Now we are 9 weeks into principal photography at the time of this writing. This year is by far our biggest and most challenging yet. I hope the fans love it as much as we’ve loved making this show over 4 seasons. Thanks to all the support our fans have given us. 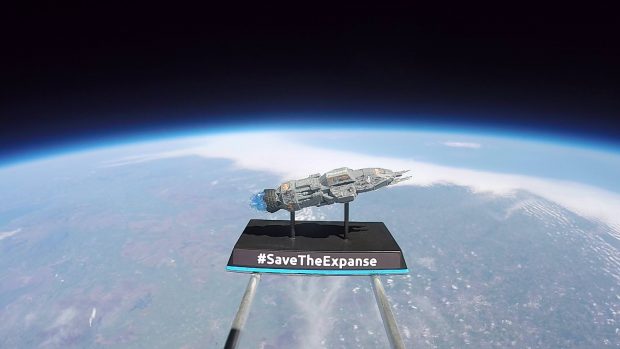 I was asked back in the spring to come aboard a new Amazon Prime Video series. Over the course of last summer, I shot two of the series’ eight episodes. Jeff Cutter shot the pilot, I co-DP’d with Evans Brown who shot the remainder. We shot with the Red Helium in 8K, using Cooke SF Anamorphics primarily.  I worked with director/producer Phil Sgriccia and Stefan Schwartz. The show will be streamed in HDR 4K 2.39:1 on Amazon Prime when launched. It was a fun show with dark writing and humour.. which lead to a gritty, real, non-glam view of super heroes as normal, corrupt people.

Here’s a blurb on the series:

Amazon’s small screen streaming lineup is set to add a live-action adaptation of Garth Ennis’s notoriously dark and violent comic book, The Boys. The television project, which has been in development on and off for several years, has finally received its long-awaited greenlight, auspiciously arriving as the creation of Supernatural and Timeless visionary Eric Kripke.

The Boys has an eight-episode order from Amazon, with Kripke serving as showrunner/executive producer, adapting the 2006-2012 comic book series created by Garth Ennis and Darick Robertson. The series will launch with directors who are experienced in adapting Ennis material in Seth Rogen and Evan Goldberg, who are credited as co-creators. 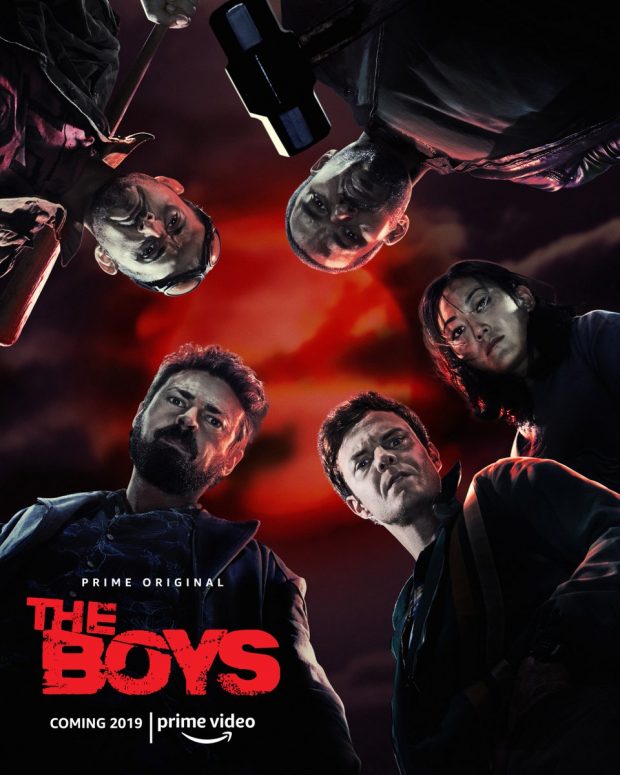